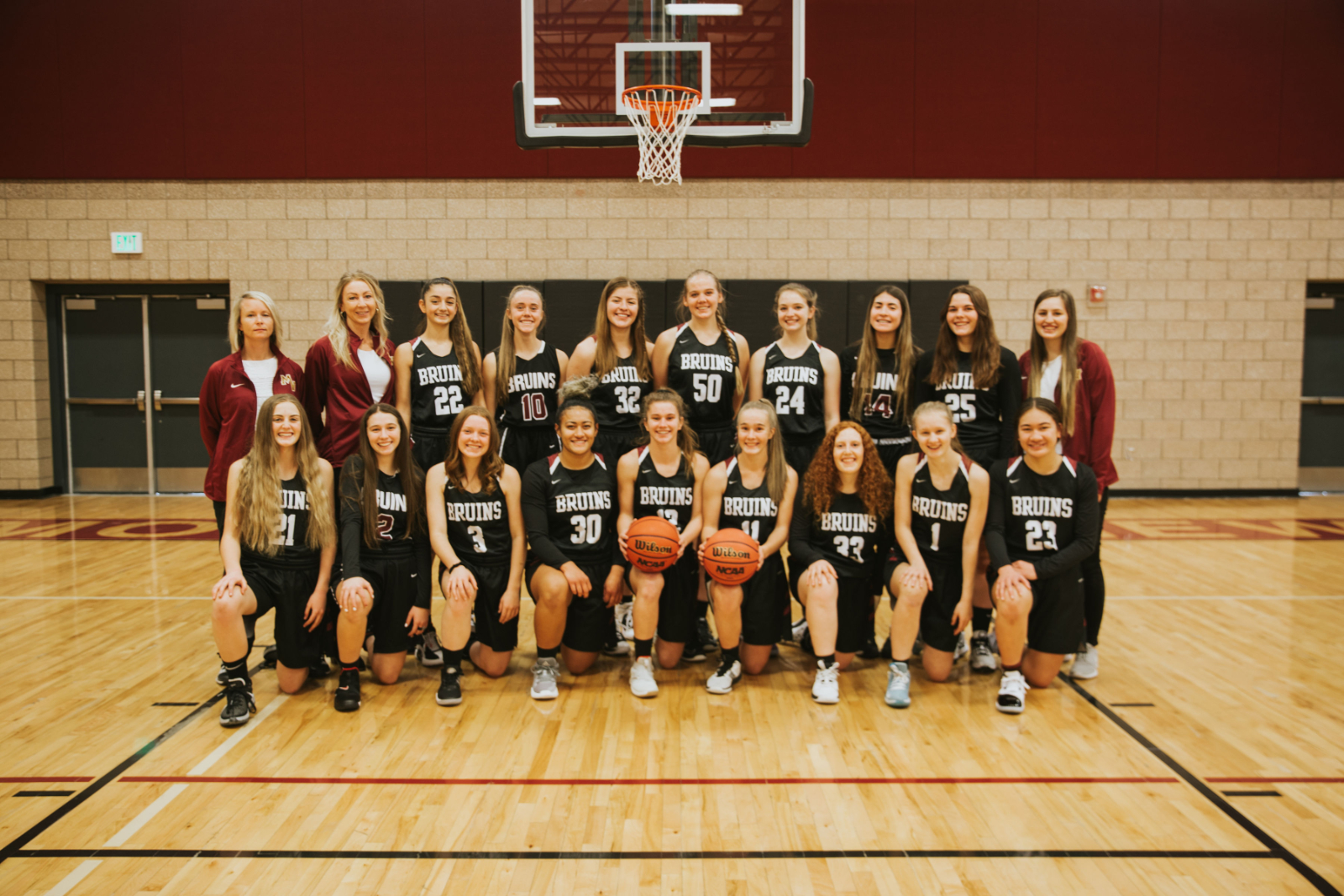 The 2020-21 girl’s basketball team finished the season with an overall record of 10-13 and 5-7 in Region 7 play, tied for fourth place with Timpanogos. In her second year as the head coach of Mountain View, Gentry Dickerson led the Lady Bruins to a victory in the postseason for the second year in a row.

“This season was unpredictable to go with the times,” Dickerson said. “Throughout the changing of rules, postponing of games, and team quarantine we still found time to enjoy the game of basketball and find success on the floor. We really emphasized that success was defined by growth and that success was not based on the outcome. The girls bought into this concept and gave us an opportunity to compete each game.”

Sydney White finished her sophomore campaign as the team’s leading scorer with 13.6 points per game. She ranked fourth in Region 7 in points per game and was named to the First Team All-Region. White also made the Deseret News 5A All-State Third Team.

Seniors Marinn Waite and Katie Peterson finished their careers with solid seasons. The two guards averaged 4.7 and 3.0 points per game. Waite also made 11 3-pointers on the season.

Seniors Josie Jorgensen and Vivian Bentancourt were significant contributors in the frontcourt, averaging 3.3 and 1.0 points per game respectively. Jorgensen also earned postseason honors as she was named Honorable Mention All-Region.

Sophomore Lili Suguturaga ended the season as the second leading scorer for Mountain View with a 4.9 points per game average.

Junior Bella Brooks averaged 3.5 points per game and finished as the Lady Bruins’ second-best 3-point shooter, making 14 from behind the arc.

Freshman Kate Shirts emerged as one of Mountain View’s top options off the bench toward the end of the season. Shirts averaged 2.8 points per game.

In their non-region portion of the schedule, Mountain View recorded a four-game win streak with home wins against Brighton, Cyprus, and Spanish Fork.

In the Charger Winter Classic at Corner Canyon High School, the Lady Bruins went 1-2, taking down 6A foe Copper Hills in the first game of the tournament. Sydney White had one of the most impressive single-game performances of the season against the Grizzlies, scoring 29 points.

The Lady Bruins concluded non-region play with a 4-5 record after road losses to Pleasant Grove and Salem Hills (in overtime).

After winning three of their last four games in the regular season, Mountain View received the No. 20 seed in the UHSAA tournament.

On Coach Dickerson’s birthday, the Lady Bruins put together one of their best performances of the season to shut down No. 13 Salem Hills on their home floor. The 48-43 win marked Mountain View’s second consecutive season with at least one upset win in the postseason.

The Lady Bruins then played one more game at No. 4 Olympus in the second round of the 5A playoffs. Mountain View lost that game, 51-38.

“Every game was a bit different and we struggled to find a rhythm and hit our stride, but they always worked to put something great together each game,” said Dickerson. “Even with all the craziness we still found a way to enjoy ourselves, grow as a team and have many successes.”