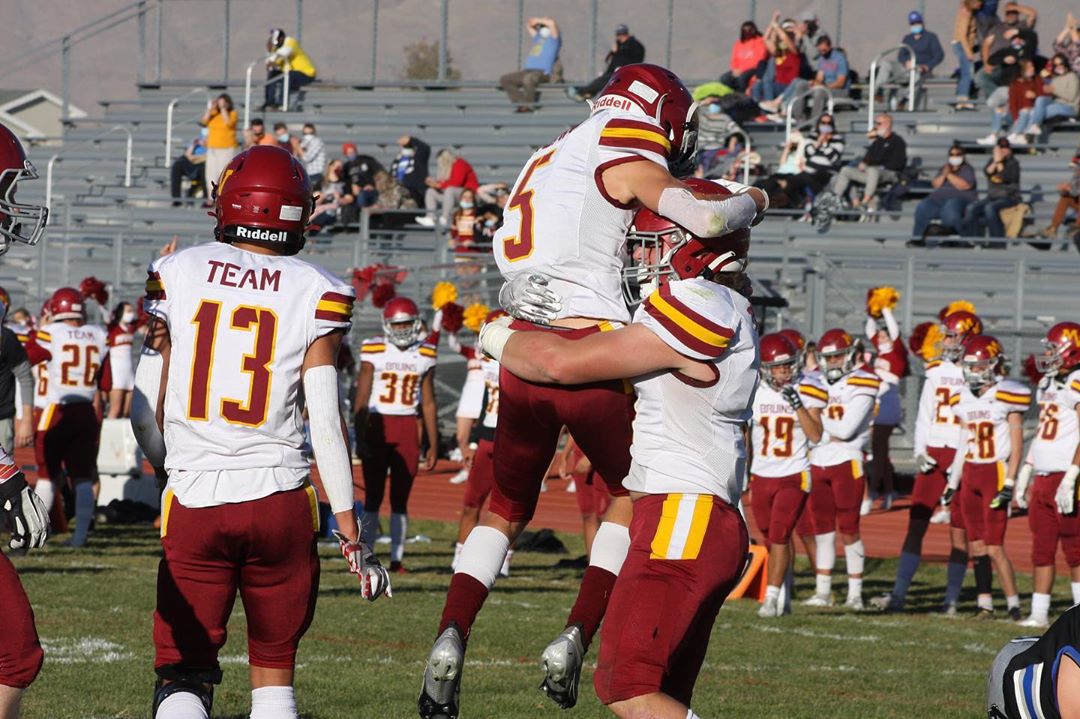 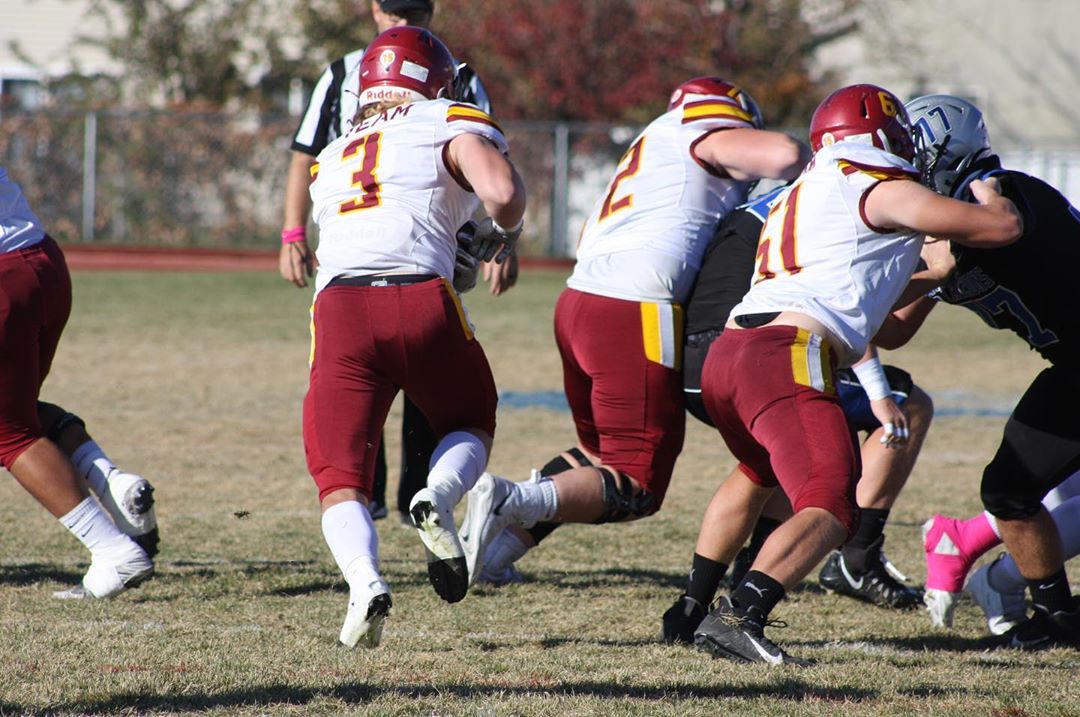 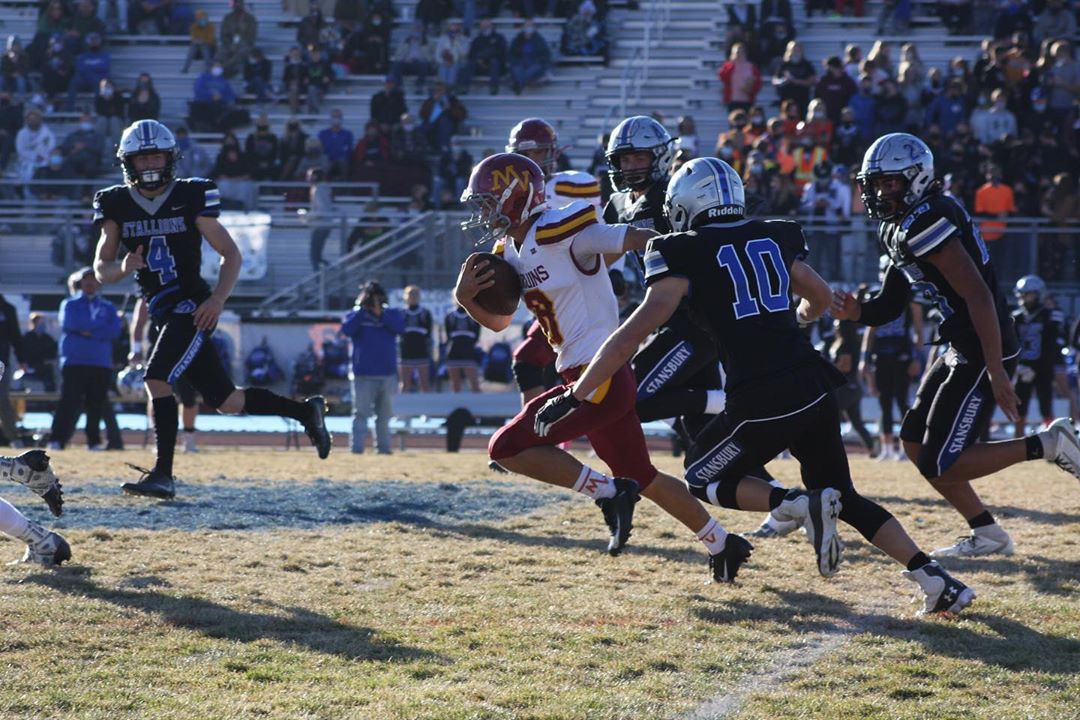 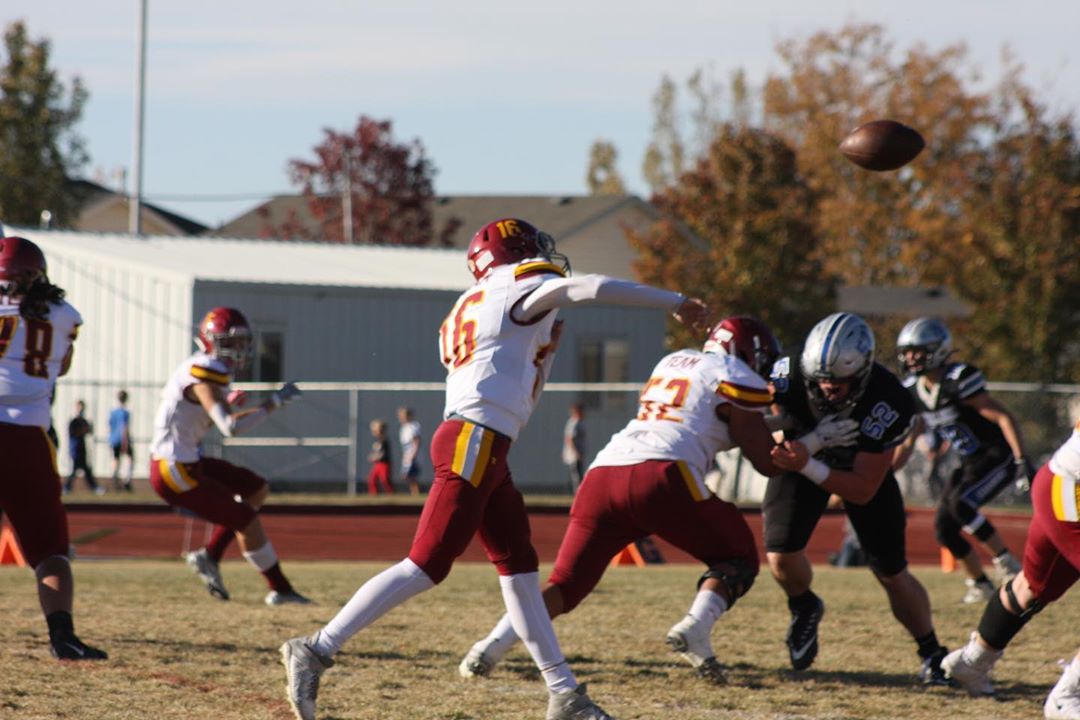 STANSBURY PARK, Utah – The 11th seeded Mountain View football team was eliminated from the UHSAA 4A playoffs by No. 6 Stansbury in Tooele County on Friday night by a score of 63-49. With the loss, the Bruins finished the season with a final overall record of 6-4.

“It’s a game we have at Stansbury we have all the time; it’s a scorefest,” Mountain View head coach Tyler Anderson remarked. “We did a lot of good things. We just couldn’t stop their offense. It’s one of those games where you hate to see either team lose.”

Quarterback Jackson McCarty threw for six touchdowns in the losing effort, the most touchdown passes by a Bruin quarterback in a game this season. Receivers David Hair and Jett Anderson led Mountain View in receiving with two touchdown receptions each. Connor Kindrick and Max Blackwell each added touchdown passes. Running back Liam Hone scored the only rushing touchdown of the day for the Bruins.

Safety Aaron Hyatt recovered a muffed punt in the second quarter that led to a score. Defensive back Jett Anderson recorded the only interception of the game, leading to another score for Mountain View in the closing seconds of the first half.

“I love Mountain View. Our team never gives up,” noted Bruin wide receiver David Hair. “We lost a couple of players [earlier this season] and I love them all. We’ve battled hard this season even without the players that we lost. I felt like its been a really good year even with this loss.”

“They battled, they’ve done a great job,” Anderson said of his 2020 Mountain View football team. “They’ve battled through this crazy season. I couldn’t be prouder of these guys. I love them and it’s been awesome coaching them.”

Stansbury jumped out to a two-score lead, 14-0, in the first quarter. The Bruins answered on their next drive with an 11-yard touchdown pass to Hair.

After another Stansbury touchdown, Mountain View capitalized off a muffed punt (recovered by Aaron Hyatt) with a 3-yard touchdown run by Liam Hone, making the score 21-13.

Scoring touchdowns on both of their next two offensive possessions, the Stallions increased their lead to 22.

Down 35-13, Mountain View responded as Hair caught his second touchdown of the day with just 44 seconds remaining in the half.

Mountain View’s only defensive takeaway of the game came when Jett Anderson intercepted a Stansbury pass on the ensuing drive, returning the ball to the Stallion 22-yard line. The Bruins scored their second touchdown in less than a minute when Anderson hauled in a 16-yard touchdown pass before the half expired. At the break, Mountain View trailed by eight, 27-35.

The Stallions began the second half similar to the way they began the game, with two unanswered touchdowns. Mountain View’s only score of the third quarter came when McCarty found Anderson in the endzone with 45 seconds left in the third quarter. The Bruins trailed 33-49 entering the final quarter.

Both teams scored on their first drive of the fourth quarter as the Stallions retained the lead, 56-41.

McCarty completed his longest pass of the game for an 80-yard touchdown pass to Connor Kindrick. Mountain View was able to convert the two-point conversion attempt as Max Blackwell caught a pass in the endzone.

On the ensuing kickoff, Bruin wide receiver Elijah Smith recovered an onside kick at the Stallion 44-yard line. After the Bruins turned over the ball on downs, Stansbury marched downfield and scored their ninth touchdown of the game, taking a 63-41 lead.

Max Blackwell scored Mountain View’s final touchdown of the season, receiving a 7-yard pass from McCarty. Kaden Kunz found Collin Brandow in the end zone on the ensuing two-point conversion attempt. Neither team scored in the final 4:47 and the Bruins ended the 2020 season with a 49-63 loss.