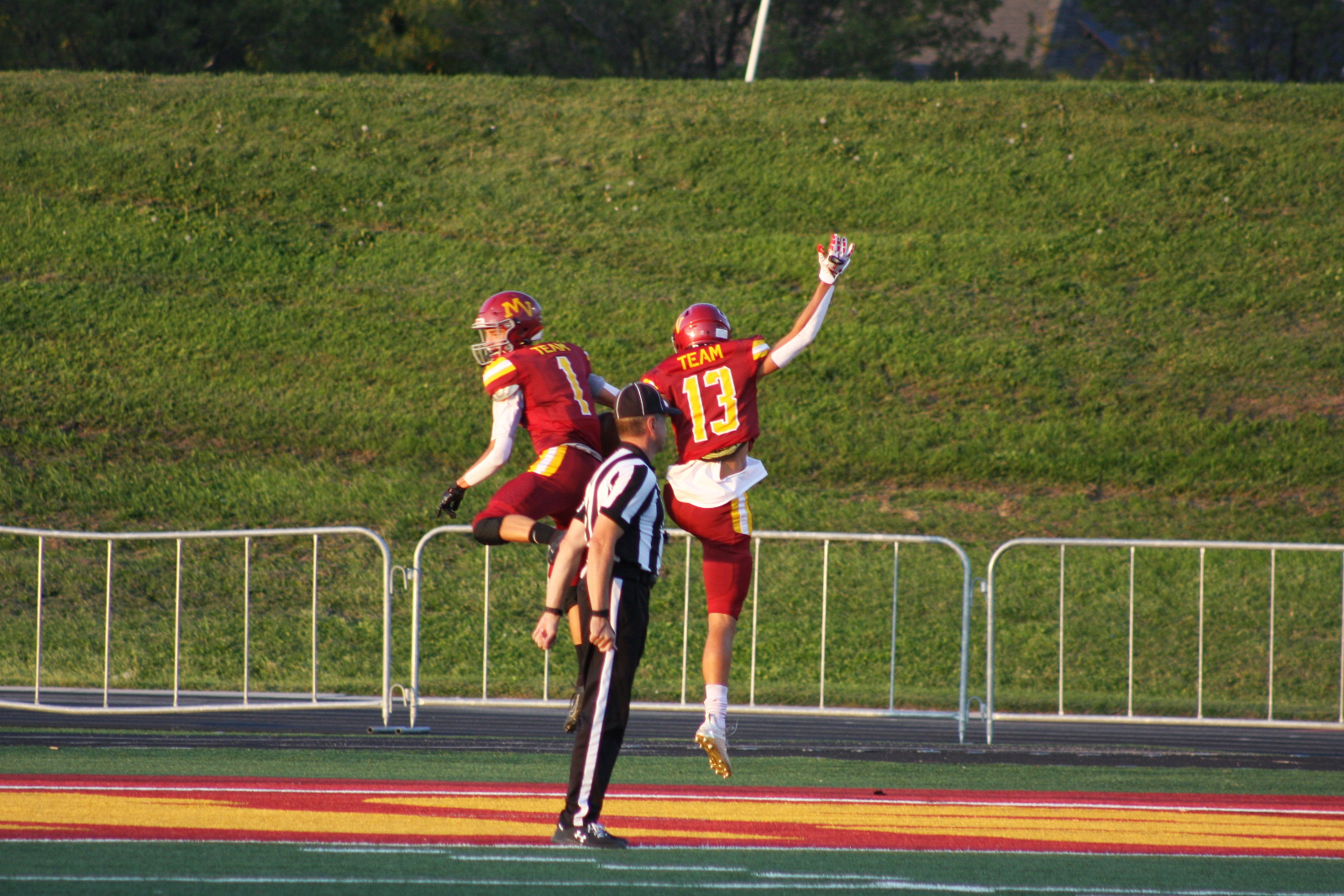 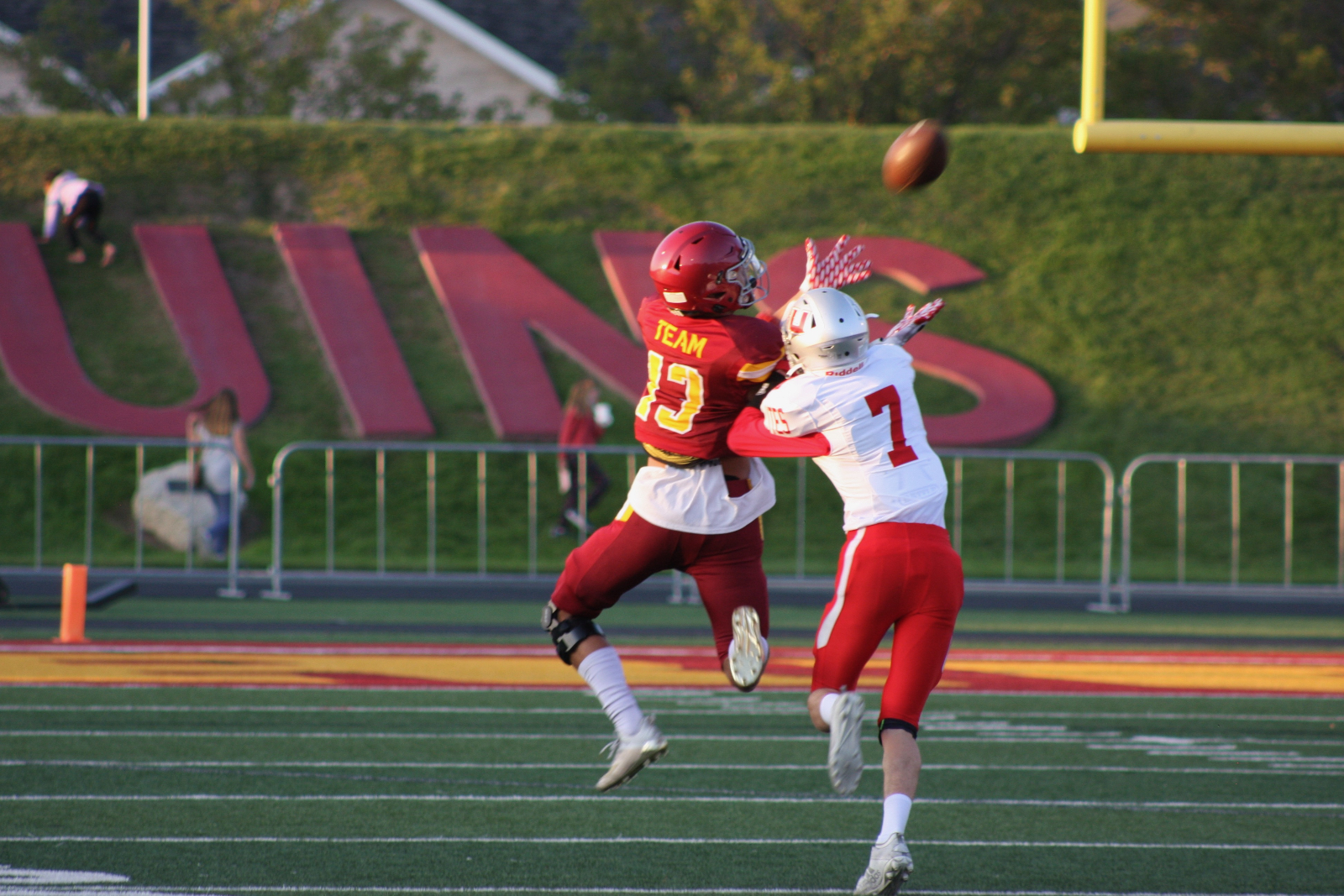 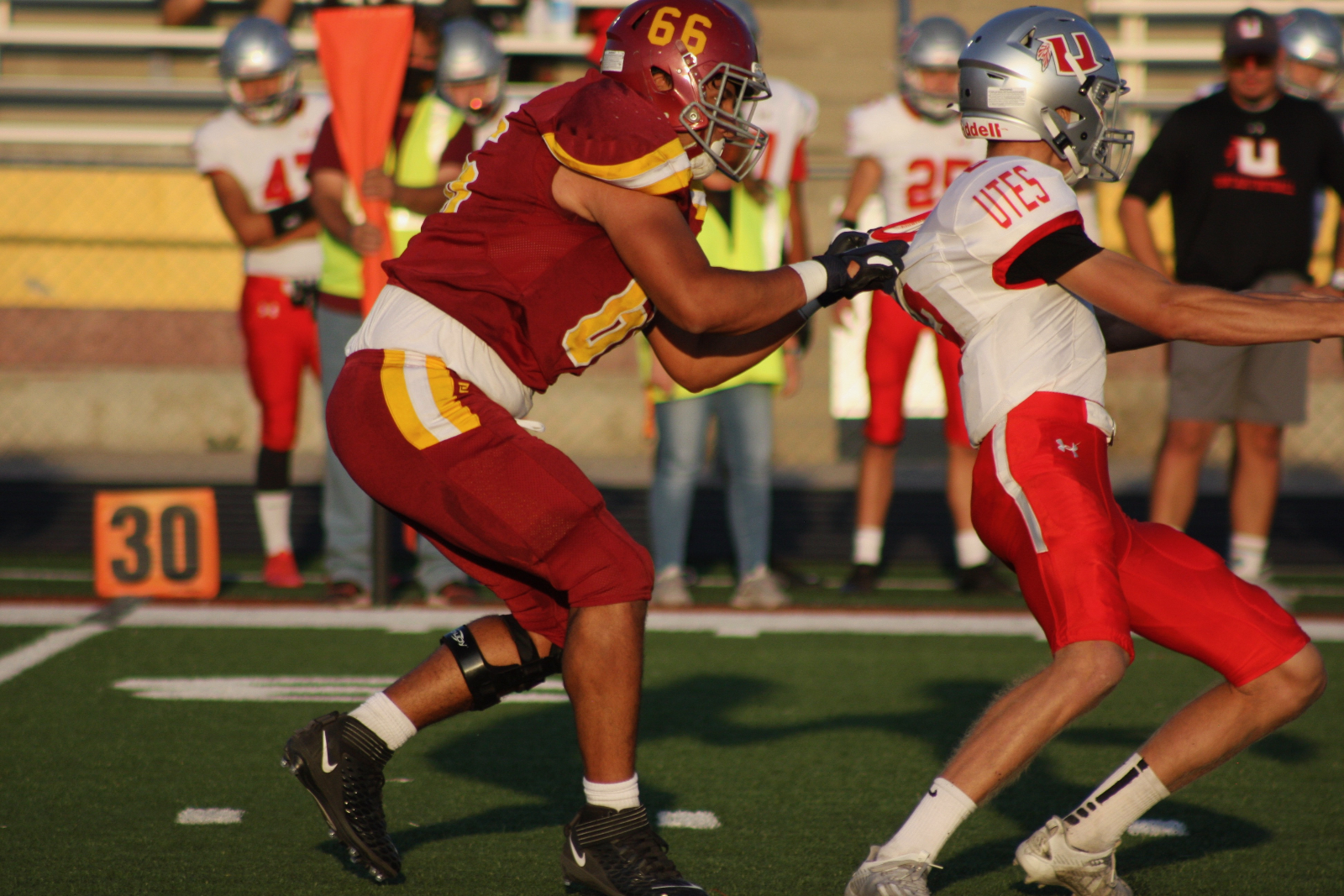 OREM, Utah — Mountain View dominated Uintah on Fri., Sept. 11, winning 49-0 at the Bruin Bowl and securing their fourth consecutive win of the season.

Sophomore quarterback Jackson McCarty threw for four TD’s in his first career start. The Bruins (4-1, 2-0 Region 10) found out earlier in the week that starter Kaden Kunz would be unavailable to play against Uintah (0-5, 0-2 Region 10).

“Nothing really changed. Everyone believed in me,” McCarty said. “They all thought I could do it, so that was nice. When we went to practice, it was a normal practice, no one was like, ‘Oh no, Jackson’s starting,’ so it was really chill. We started off a little slow, and then we got it going in the second quarter.”

Mountain View head coach Tyler Anderson also admired the play of his young quarterback and how the team rallied around him. “Everybody made him feel like he was the guy,” noted Anderson. “Our receivers made plays for him tonight. Everybody rallied around him really well. He did a great job; he made some sophomore mistakes, but that’s to be expected. He’s young and it’s his first start but he played really well.”

Wide receiver David Hair caught two touchdown passes, both in the first quarter. Hair has caught at least one touchdown pass in every game for the Bruins this season. Wide receivers Kynan Sigua and Connor Kindrick also had touchdown receptions.

On defense, DaiTrez Johnson recorded two interceptions in the first two drives of the game. Colton Burr picked off another Ute pass on the next drive. Defensive lineman Chris Esparza led all tacklers with eleven tackles, including nine solo stops and six sacks. Junior Teuapa recorded seven solo tackles and two sacks for the Bruins.

Before the game, both teams took a moment to honor the victims of the tragic events on Sept. 11, 2001.

Game night! MV vs Uintah. We want to thank Uintah for helping us honor the fallen this Sept. 11th. pic.twitter.com/76HsdWviCF

On the first drive of the game, DaiTrez Johnson picked off a Ute pass, giving Mountain View the ball at their own 15-yard line. McCarty led the Bruin offense on an 85-yard drive capped off by a 27-yard touchdown pass to David Hair that gave Mountain View a 7-0 lead.

On the ensuing drive, Johnson recorded his second interception of the game, giving the ball back to the Bruins yet again.

Mountain View was unable to capitalize on that second turnover after Ivan Cueva missed a 24-yard field goal. On their third consecutive drive, Uintah threw another interception, this time to linebacker Colton Burr.

“[The turnovers] helped us out a ton,” said Mountain View quarterback Jackson McCarty. “Getting a pick and [being] able to go down and score and then the second time we should have scored.”

Hair caught his second touchdown pass of the game late in the second quarter when McCarty found the Bruin receiver from six yards out. After a Ute punt, Mountain View scored on the last play of the half as Connor Kindrick caught a touchdown pass over two Uintah defenders to give the Bruins a 21-0 halftime lead.

The Bruins added to their lead midway through the third quarter as Liam Hone found the end zone on a 12-yard rush.

On their next offensive possession, Colton Burr tacked on another rushing touchdown as Mountain View went up 35-0 late in the third.

Eleven seconds into the final quarter, wide receiver Kynan Sigua caught his second touchdown of the season. The pass also marked McCarty’s fourth passing score of the day, the most by any Bruin quarterback in a game this season.

“[The receivers] balled out; I didn’t have a ton of amazing throws,” said McCarty. “David balled out; Connor with that amazing catch at the end of the second quarter, so it was fun.”

Running back Coleman Curtis made his way into the end zone on a 10-yard run, putting the Bruins up 49-0 with 5:21 left in the game.

Mountain View closed out the victory as McCarty kneeled out the clock to end the contest.

FINAL: Mountain View completes the shutout of Uintah, 49-0! Kynan Sigua caught a TD and Coleman Curtis ran one in to add to our score in the 4Q. It’s homecoming next week against Ben Lomond — See you at the Bruin Bowl! M-V-H-S, the best. 🙌🏽🎉🐻

The Bruins continue region play next week as they host the Ben Lomond Scots (2-3, 0-2 Region 10) for homecoming. The Scots fell Friday, 28-21 to Cedar Valley. The game is set to kick off at 7 p.m. MT and will be live-streamed on the NFHS Network, a subscription-based platform. Tickets can be purchased at https://mountainviewbruins.org/event-tickets. Tickets must be purchased in advance and will not be sold at the gate. All in attendance must wear a face covering.